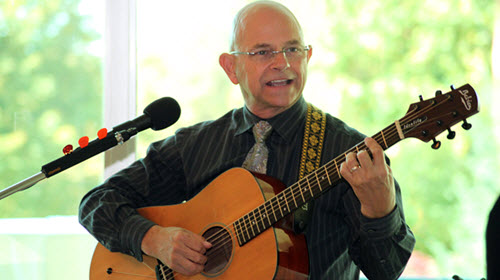 Paul Decker was born and raised in Indiana. He started singing at age of the age of 4, playing trumpet & guitar at the age of 10. He then started to pick up piano & keyboards in his early teens. Paul’s been a full-time working musician since 1972, traveling extensively doing “road work” though the 70’s & 80’s. He’s spent many years making a living singing and performing on keyboards, guitar, bass, trumpet, and pretty much ANYTHING that makes sound. He has been blessed to had shared the same stages as such musicians and performers as Britian’s FOGHAT, JOURNEY’S Steve Smith and his Fusion Band, Jazz greats Ronnie Laws and Frank Gambale, The John Entwhistle Band (bassist for The WHO), Rick Nelson (just weeks before his tragic plane crash),the GREAT Chuck Berry, and Donnie and Marie Osmond. He’s even performed on the stage of the famous Grand Ole Opry in Nashville.