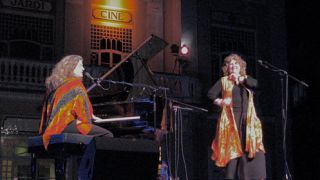 International touring artists Diane Van Deurzen & Lisa Otey are a dynamic duo, a perfect blend of hot jazz, sultry blues and boogie-woogie. They take their act to festivals, clubs and theatres around the world and are known for creating an atmosphere of intimacy with their humor and joyful interactions with the audience.

Diane and Lisa have co-produced several CDs on their label, Owl’s Nest Productions, including Diane’s “I Never Knew”, Lisa’s “Trio”, “Bring Your Own Boa” for Lisa Otey and the Desert Divas, and Diane & Lisa’s duo CDs, “You Got What I Want”, “Wild Women” and their Christmas hit, “Meet Me Under the Mistletoe”.

Diane grew up in rural Wisconsin, one of 7 children in a blue-collar community that centered around the paper mill and dairy farms near Appleton. Her father nurtured her love of singing by introducing her to the albums of Etta James and Ella Fitzgerald. Diane also loved poetry, which influenced her style as a lyricist. Diane always created opportunities to perform professionally, singing in bands, working in theatre and making recordings, alongside her career as a nurse in Wisconsin and, since 1992, as a teacher in Arizona. Lisa grew up in a rural community outside of Portland, OR, one of 3 children in a family of musicians. Lisa moved to Arizona in 1984 to study jazz piano and begin her career performing and also working in theatre. In 2005, Diane & Lisa began performing as a duo, touring across Europe, Australia, the US, Canada, and Mexico. In 2015, they began touring in the Midwest, making Michigan their home in 2021.

“Van Deurzen’s voice is warm and soothing, pouring out the lyrics with effortless control.”
-Tucson Lifestyles

“Whenever these two artists perform together, people comment on their easy rapport and emotional connection. Otey’s piano and vocals are hot and steamy. Van Deurzen sings sweetly. Together they blend like a musical cappuccino with extra foam on top.” -Chuck Graham

“Fun stuff from Lisa Otey and Diane Van Deurzen. (Wild Women) is a tribute in song to 100 years of women blues singers with a great mix of sass, sentimentality, and humor.” -Duncan Hudson, KXCI

“They put their hearts and souls into each song they sang and the fun they exuded on stage was infectious as it engulfed the audience.   Hand clapping, toe tapping, smiles, hoots and hollers prevailed throughout their 2 hour performance. People are still talking about their uplifting performance and can’t wait for them to return” -Clearwater Tribune